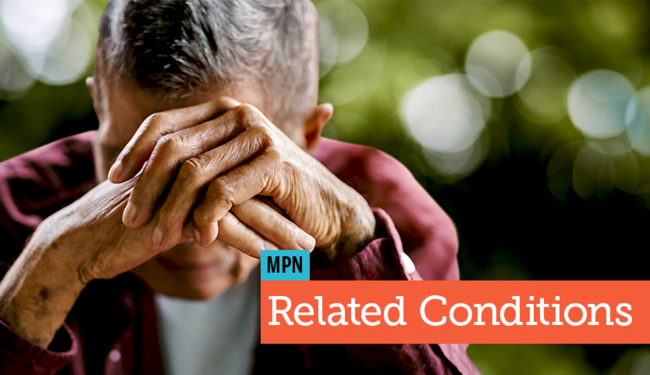 Myeloproliferative neoplasms (MPNs, formerly referred to as myeloproliferative disorders) are a group of blood diseases. In each type of MPN, there is an overproduction of one or more blood stem cells in the bone marrow. Red blood cells (RBCs), white blood cells (WBCs) called neutrophils, and platelets may be dysfunctional and excessive in the bone marrow and blood circulation. MPN symptoms are caused by these high levels of abnormal blood cells. Treatment options for MPNs depend on the type of disease.

There are several health conditions that are significantly more common in people with MPNs than in the general population. When someone has more than one health condition at the same time, the conditions are known as comorbidities. Comorbid conditions may be related to MPNs in different ways. When an additional medical issue makes an existing disease harder to treat, it is known as a complication. In people with MPNs, having a comorbidity can complicate cancer treatment and add to the disease burden. Comorbidities are believed to contribute significantly to fatigue in MPNs.

Knowing the common comorbidities of MPNs can help you recognize symptoms and talk to your doctor about treatment. Treating comorbidities may improve quality of life and lower the risk for life-threatening complications.

Some medications can cause dangerous interactions. Always make sure your health care provider is aware of every medication you are taking for every condition, whether it is available over the counter or by prescription, including any vitamins or herbal supplements.

According to one study, people with MPNs have increased risk for infections including:

The study also found a significantly higher risk in people with MPN for sepsis, a potentially life-threatening immune response to an infection.

Susceptibility to infections may be due both to MPNs themselves and to the effects of MPN treatments. JAK2 inhibitors, a class of medications often used to treat MPNs, can contribute to a higher risk for infections.

Since infections are more likely to become serious in people with MPNs, it’s important to contact your doctor or a nursing advice line if you experience any of the following symptoms:

Chronic inflammation in MPNs is believed to contribute to the development of cardiovascular complications such as atherosclerosis (also referred to as “hardening of the arteries”) in people with MPNs. Younger people with MPNs have a higher risk for dying from cardiovascular events, such as myocardial infarctions (heart attacks) or strokes, than people of similar ages who have not been diagnosed with MPNs.

Your risk for cardiovascular problems is even higher if these additional risk factors are present:

You and those you live with should be aware of the symptoms of severe cardiovascular events. Heart attack and pulmonary embolism (blood clot in the lung) can cause chest pain, shortness of breath, and nausea. Strokes can cause severe headaches, disorientation or impaired speech, and weakness in the arms or legs. Call emergency services immediately if you or your loved one experience any of these symptoms.

If you are concerned about your risk for serious cardiovascular complications, your doctor can help you find ways to reduce your risk. These may involve stopping smoking, getting regular exercise, and making changes to your diet, as well as medication. Depending on the specifics of your individual condition, your doctor may recommend taking aspirin, which can help lower the risk for thromboembolisms (blood clots), heart attacks, and strokes in some people. However, aspirin can also raise the risk for bleeding. Always talk to your doctor before making any changes to your treatment regimen.

Since MPNs cause overproduction of blood cells, and the blood cells tend to be abnormal and dysfunctional, it is not surprising that blood disorders are a common comorbidity.

Anemia is defined as having low levels of red blood cells. Anemia may be included as part of the criteria for diagnosing MPNs. Anemia can be caused directly by the MPN, or it may occur as a side effect of cancer treatment. It can also be caused by nutritional deficiencies of iron or vitamin B12 or by unrelated conditions. Symptoms of anemia include fatigue, weakness, pale skin, cold hands and feet, and shortness of breath. Anemia may be accompanied by feelings of pain, fullness, or pressure in the abdomen resulting from splenomegaly (enlarged spleen). Most MPN treatment regimens address anemia. Therapies may include red blood cell transfusion, nutrition, hormonal medication such as danazol, or angiogenesis inhibitors such as Thalomid (thalidomide) or Revlimid (lenalidomide).

People living with an MPN are more likely to experience both blood clots and bleeding problems. Blood clots can block arteries and cause life-threatening events such as stroke or pulmonary embolism. Bleeding may be minor or severe.

People with MPNs may develop acquired von Willebrand disease. Von Willebrand disease (VWD) is a bleeding disorder that can cause nosebleeds, excessive bleeding during dental and medical procedures, easy bruising, and heavy periods in women. In most cases, VWD is a genetic disorder, but it can sometimes be caused by MPNs, lupus, heart disease, or certain medications. In one study of 116 people with essential thrombocythemia (ET) and 57 people with polycythemia vera (PV), 55 percent of those with ET and 49 percent of those with PV developed acquired von Willebrand disease. There are several therapies available to treat VWD.

There is evidence that people with MPNs may be predisposed to develop autoimmune (AI) disorders — chronic conditions in which the immune system mistakenly attacks one’s own tissues. Inflammation is a major aspect of autoimmunity and the direct cause of pain and tissue damage. In people with MPNs, AI conditions may worsen the symptom burden and even cause cancer cells to grow faster, contributing to disease progression.

These are the autoimmune conditions most commonly seen in those with MPNs, along with their major effects:

People diagnosed with MPNs have a significantly increased risk for developing a secondary cancer — whether another type of blood cancer or different type of cancer altogether. Cancers that have been shown to develop more commonly in those with MPN than in other people include:

Your doctor can help you better understand your individual risk for developing related conditions and recommend steps to lower your risk.

Heart Problems and MPNs: Are They Connected?

Heart Problems and MPNs: Are They Connected?

“The anemia is exhausting me,” wrote a member of myMPNteam. “Anyone else riding the anemia...

“The anemia is exhausting me,” wrote a member of myMPNteam. “Anyone else riding the anemia...
read article >

Research has shown that smoking is associated with an increased risk of developing...

Research has shown that smoking is associated with an increased risk of developing...
read article >