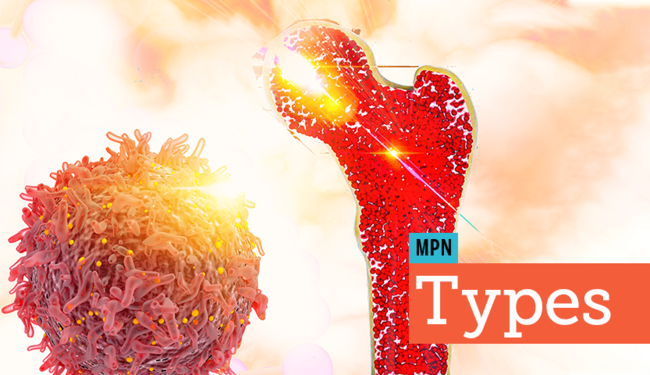 Myeloproliferative neoplasms (MPNs) are cancers of the blood and bone marrow. Before the World Health Organization reclassified this group of blood cancers in 2008, they were known as myeloproliferative disorders (MPDs). MPNs can have many features in common with other types of blood cancer such as leukemia, lymphoma, and multiple myeloma. In some cases, different types of MPNs and other blood cancers are related in complex ways.

MPNs develop when blood stem cells in the bone marrow grow and reproduce abnormally. Abnormal growth has two results: excess numbers of one or more types of blood cells and blood cells that do not function normally.

Symptoms of MPNs can vary by type of MPN, and some people with MPNs may not experience any symptoms early on. In many people, an MPN is diagnosed after a routine blood test. Others may go to their doctor after noticing symptoms, leading to tests and a diagnosis of MPN.

How MPNs Are Classified

MPNs may be classified in different ways. One main distinction is which blood cells are produced in excess — red blood cells, one or more types of white blood cells, platelets, or multiple types of cells.

Another consideration is which genetic mutations are present. Like most cancers, MPNs result when changes in DNA cause the uncontrolled growth of cells. Some mutations may be inherited from parents, while others occur randomly during fetal development, and still others are acquired over the course of a lifetime. Knowing which mutations are present helps doctors better understand which treatment options for MPNs are likely to be most effective.

Read more about inherited and environmental risk factors for MPNs.

There are three types of myeloproliferative neoplasms considered to be classic.

In polycythemia vera, too many red blood cells are produced in the bone marrow. In rare cases, PV can transform into acute myeloid leukemia (AML).

Extra RBCs thicken the blood, raising the risk for dangerous blood clots, stroke, or heart attack. The spleen becomes enlarged as it tries to remove the excess RBCs, causing pain or a full feeling on the left side of the abdomen. Other common symptoms of PV include itching, reddened skin, blurry vision, tinnitus (ringing in the ears), and headaches.

PV becomes more common as people age and often presents around age 60. Roughly 95 percent of people with PV have a JAK2 gene mutation.

If the bone marrow produces too many platelets, they enter the bloodstream and interfere with normal blood clotting. Essential thrombocythemia is the result. ET is characterized by abnormal blood clotting and sometimes bleeding. Rarely, ET can transform into acute leukemia.

Early in the course of ET, people may not show any symptoms. As the condition progresses, people with ET may experience headaches, vision or hearing problems, enlarged spleen, burning pain in the hands, and tingling or numbness in the hands or feet. Overproduction of platelets may lead to clotting, increasing the risk for a serious health event, such as a heart attack or a stroke. Conversely, very high levels of platelets may also lead to bleeding symptoms, such as nosebleeds, bruising easily, or bloody stool.

ET is most commonly diagnosed in women over the age of 50. In addition, 50 percent of people with ET have a JAK2 gene mutation.

Also known as PMF or chronic idiopathic myelofibrosis, MF occurs when scarring (fibrosis) in the bone marrow impairs the production of red blood cells and granulocytes (a type of white blood cell). In MF, RBCs and granulocytes develop abnormally, have irregular shapes, and do not function effectively. As fibrosis progresses, the bone marrow produces too few blood cells. MF can develop on its own or as a result of polycythemia vera (in 15 percent of PV cases) or essential thrombocythemia. MF can be further differentiated into two stages: prefibrotic or early-stage myelofibrosis and the overt fibrotic stage. Rarely, MF can transform into acute myeloid leukemia (AML).

MF is most often diagnosed in people over age 60. Between 50 percent and 60 percent of people with MF have a JAK2 gene mutation, 5 percent to 10 percent have a mutation of the MPL gene, and some have a genetic mutation called CALR.

Other Types of MPNs

Several other types of blood cancer can be categorized as MPNs. Some are also considered types of leukemia.

This condition may be referred to as either chronic myeloid leukemia or chronic myelogenous leukemia. In CML, the bone marrow produces large numbers of white blood cells known as granulocytes. The WBCs crowd the bone marrow, inhibiting production of all types of blood cells. CML cells are also abnormal and unable to function in their role of protecting the body from infection.

Symptoms of CML include fatigue, weakness, bleeding, and bruising easily. Symptoms may also include fever and night sweats.

About 70 percent of people diagnosed with CML are over the age of 40. CML is more common in men.

In CNL there is an excess of neutrophils, a type of white blood cell, in the blood and bone marrow. Neutrophils are white blood cells that fight infections as a result of bacteria, virus, or fungus. CNL can progress to acute myeloid leukemia (AML). CNL is very rare. Only an estimated 200 people have been diagnosed with CNL since it was discovered in 2001.

People with CNL rarely have symptoms early on in the disease. However, as the disease progresses, the spleen and liver may become enlarged. People may also experience fatigue, night sweats, and fever.

Also known as systemic mast cell disease, mastocytosis is a rare disorder in which mast cells accumulate in the bone marrow, skin, or gastrointestinal tract. There are many subtypes of mastocytosis. Mast cells are part of the body’s response to parasites, but they are best known for their role in allergies. Mast cells release histamine in the body, triggering itching, abdominal cramping, or anaphylaxis — a life-threatening allergic response. Mastocytosis is the result of an acquired genetic change in a protein called c-kit. More than 90 percent of adults and more than 40 percent of children with mastocytosis have this mutation.

Symptoms of mastocytosis vary widely by the subtype of the condition. They can include a variety of skin lesions, enlarged spleen, gastrointestinal symptoms, and loss of bone density.

Mastocytosis can affect both adults and children. For many children, it starts in the first two years of life, but often resolves in puberty. Children typically develop mastocytosis in the skin. Adults may develop the condition in the bone marrow and skin.

Common symptoms are fever and fatigue. In addition, some people experience swelling around the lips or eyes, itching, and swollen hands or feet.

Any abnormal production of blood cells in the bone marrow that does not fit into one of the types previously described falls into this category. Symptoms for myeloproliferative neoplasm, unclassifiable, include fever, weight loss, and fatigue.