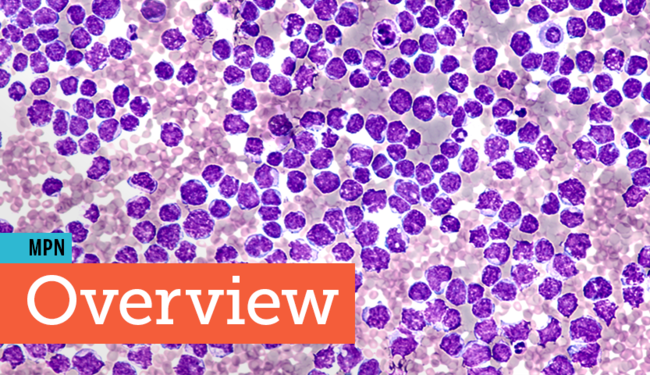 Myeloproliferative neoplasms (MPNs) are a group of chronic blood cancers closely related to leukemia, lymphoma, and myeloma. Each type of MPN involves the overproduction of one or more types of blood stem cells — red blood cells, white blood cells, or platelets — in the bone marrow. The excess of abnormal blood cells can lead to a variety of symptoms including fatigue, headaches, blurred vision, and night sweats. The three main types of MPNs are polycythemia vera (PV), essential thrombocythemia (ET), and primary myelofibrosis (MF or PMF).

In the majority of cases, there is no cure for MPNs. MPNs grow slowly, and most people can live a near-normal life span with treatment. Treatment options for MPNs include chemotherapy, targeted medications such as kinase inhibitors, and supportive treatments to manage symptoms related to the overproduction of blood cells.

How Common Are MPNs?

MPNs are considered rare diseases since each type affects fewer than 200,000 people in the United States. Researchers have estimated the prevalence of the three “classic” MPNs (based on 2010 U.S. health care claims data) to be approximately:

According to the National Cancer Institute, there were 58,097 Americans living with chronic myeloid leukemia (CML, also called chronic myelogenous leukemia) in 2017.

Other types of MPNs are even rarer.

Like other cancers, myeloproliferative neoplasms (MPNs) are caused by genetic mutations that allow some cells to divide and grow in a disorganized way. There are two main types of mutations, inherited and acquired. Most cancer is caused by acquired mutations, which occur over the course of a person’s life due to aging and exposure to carcinogens such as radiation, smoking, and certain chemicals and viruses.

Genetic mutations that promote unchecked growth cause cells to divide at a faster rate without regulation or order, becoming more and more mutated. When these disordered cells begin to invade nearby tissues or break off and migrate to other locations, they have become cancerous.

Age is an important risk factor for developing MPNs. Most people are diagnosed during or after their sixth decade of life. Other risk factors for developing MPNs can include exposure to radiation and carcinogenic chemicals including benzene. In rare cases, more than one person in a family may develop MPNs. However, MPNs are not considered to be inherited diseases.

Read more about risk factors and causes of MPNs.

Many people do not experience any symptoms of MPNs at the time of diagnosis. Some of the most common symptoms across types of MPNs include fatigue, itching, night sweats, headaches, dizziness, and blurred vision. Some symptoms, such as abnormal bleeding, blood clots, enlarged spleen, and bone and joint pain, are more common in some types of MPNs than others.

Some symptoms, including hair loss, nausea, diarrhea, vomiting, mouth sores, and neuropathy (tingling or numbness in the extremities) are more likely to be side effects of treatment for MPNs. Your doctor can help you understand where symptoms are coming from and how best to manage them.

In all MPNs, abnormal growth of blood stem cells results in excess and dysfunctional cells. MPNs are categorized based on which type of blood cell is overproduced, whether red blood cells (RBCs), white blood cells (WBCs) called neutrophils, platelets, or multiple types of cells. MPN types are further characterized by which genetic mutations are present in cancer cells. MPNs and other blood cancers such as leukemia and lymphoma are all closely related, and one type may transform into another type over time.

The three main types of MPNs are:

These types are sometimes referred to as “classic” MPNs or Philadelphia-negative MPNs.

Other types of MPNs include:

Some types of MPNs are extremely rare.

How Are MPNs Diagnosed?

It can take many years for MPNs to start causing symptoms, and many people have symptoms for a long time before going to their doctor for a diagnosis. For these reasons, MPNs are often discovered when blood tests ordered for another health issue return abnormal results.

Once an MPN is suspected, doctors will usually take a medical history to assess symptoms and any risk factors that might make an MPN more likely. A physical examination can check for signs such as an enlarged spleen.

Blood samples are taken to perform tests including:

Bone marrow biopsy and bone marrow aspiration are similar procedures that obtain samples of liquid and solid bone marrow using a needle. Bone marrow is used for genetic testing to determine which genetic mutations are present in cancer cells. These test results are often necessary to confirm the diagnosis of an MPN.

Before diagnosing an MPN, the doctor will also rule out other MPNs or unrelated conditions that could potentially cause similar symptoms and test results.

Read more about how MPNs are diagnosed.

In cases of MPNs where people are not experiencing any symptoms and their risk for developing dangerous complications is considered low, doctors may recommend a watch-and-wait approach rather than beginning treatment immediately. If your risk increases or symptoms develop, your doctor may recommend starting treatment.

Hematologist-oncologists — doctors who specialize in blood diseases and cancer — recommend treatments depending on what type of MPN you have, what treatments you have already tried, and your personal condition and risk factors. Treatments for MPNs may include chemotherapy and targeted medications, such as Janus kinase (JAK) inhibitors, tyrosine kinase inhibitors (TKIs), and interferons. In rare cases, some people with MPNs may be candidates for stem cell transplants (also known as bone marrow transplants), which can potentially cure MPN.

People with MPNs are likely to have comorbidities — other health conditions in addition to MPN. When additional health problems make MPNs harder to treat, they are considered complications. Comorbidities are believed to contribute significantly to the disease burden in MPNs, especially fatigue. Having additional health conditions also raises the risk of death in people with MPNs.

People diagnosed with MPNs have a higher risk than the general population for developing:

There are steps you can take to reduce your risk for cardiovascular problems. Most comorbidities can be managed with lifestyle changes or medications. Treating comorbidities may improve your quality of life and help reduce the risk of death.

Read more about comorbidities of MPN and related conditions.

What Is the Prognosis for MPNs?

Your doctor can help you understand your personal risk factors that contribute to your prognosis. These may include the type of MPN you have, your age and overall condition, any additional health problems, and how you treat your MPN.

A Short History of MPNs

In the 1840s in France, Germany, and Scotland, there were early descriptions of people with high white blood cell counts and enlarged spleen; most likely these were describing chronic myeloid leukemia (CML). During this period, arsenic was typically prescribed as treatment for CML. Phlebotomy (drawing blood) has been a mainstay of treatment for polycythemia vera (PV) for more than 100 years, although it is now often combined with medications.

In the early 20th century, CML was primarily treated with radiation therapy and later with traditional chemotherapy or interferons. In the 1980s, allogeneic stem cell transplants (using cells from donors) became a focus of treatment in people who met eligibility criteria. Since medications of the tyrosine kinase inhibitor (TKI) class became available in 1998, these drugs have become first-line therapy for CML and some other MPNs.

Before the World Health Organization (WHO) reclassified this group of blood cancers in 2008, they were known as myeloproliferative disorders (MPDs). The categorization of MPN types was more recently revised by the WHO in 2016. Criteria for diagnosing types of MPNs now include which specific genetic mutations are involved. Doctors gained better tools to predict the prognosis for MPNs starting in 2009 when scoring systems were first developed to account for risk factors.

Today, research is focused on identifying genetic markers in cancer cells that will improve the ability to predict prognosis. There is also focus on new treatments that will be more effective at prolonging survival or perhaps even offer a cure for MPNs.