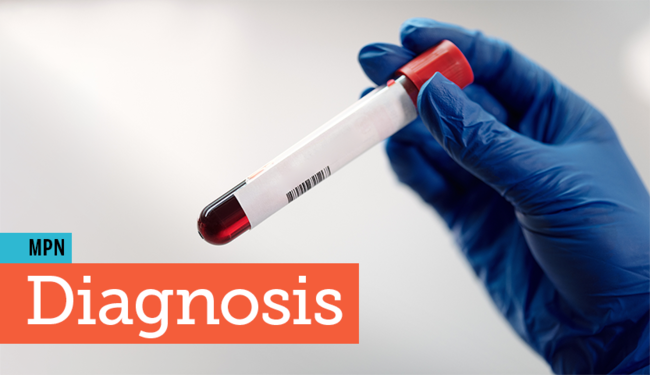 Myeloproliferative neoplasms (MPNs) are blood conditions that involve the overproduction of one or more types of blood stem cells in the bone marrow. MPNs are diagnosed based on the results of a physical examination, blood tests, cytogenetic testing, and in some cases, a bone marrow biopsy. The results of these procedures provide diagnostic criteria that lead to a diagnosis for a specific type of MPN. Test results also allow doctors to assess risk factors that help them recommend safe and effective treatment options.

A doctor will typically start the diagnostic process with a medical history and physical exam. During the medical history, they will ask about any symptoms, such as fatigue, fevers, or shortness of breath. The doctor may ask whether you have had cancer before and whether you have been exposed to radiation or chemicals such as benzene, which are known risk factors for MPNs. In the physical exam, the doctor may check for symptoms such as an enlarged spleen or liver, or redness in a person’s skin. Your doctor may also check for hypertension (high blood pressure), blood clots, or signs of abnormal bleeding, such as bruising easily or frequent nosebleeds.

MPNs are sometimes discovered based on physical symptoms. However, people often do not have obvious symptoms in the early stages of MPNs. MPNs are often discovered inadvertently when routine blood tests return unusual or unexpected results.

If abnormal blood test results are discovered by a primary care provider or an internal medicine physician, they will often refer the case to a hematologist-oncologist, a doctor who specializes in blood disorders and cancer.

The diagnostic process for MPNs may involve a number of tests and other procedures. Each test provides different information that helps a doctor establish diagnostic criteria and assess risk factors so they can recommend treatment.

There are a few different types of blood tests a doctor might order when an MPN is suspected.

The doctor may also order a peripheral blood smear, a lab test to examine a smear of your blood under a microscope. A peripheral smear can check for immature blood cells called blasts, as well as abnormally shaped RBCs and the presence of platelet clumps.

Depending on the blood test results, doctors may order a follow-up bone marrow aspiration and biopsy to help diagnose an MPN.

Bone marrow is the spongy tissue in the center of most bones where blood cells are formed. A bone marrow aspiration and a biopsy are needed for a definitive diagnosis for most MPNs. These two procedures are often performed at the same time. Bone marrow aspiration is the collection of cell-rich liquid from bone marrow, while a bone marrow biopsy takes a sample of solid bone marrow. Both samples are taken with needles. Typically, the site of these tests is the rear portion of the pelvis (hip bone). The doctor will numb the area to reduce discomfort before performing the aspiration and biopsy. The samples will be analyzed in a laboratory. A hematopathologist will perform genetic testing on cells found in the samples.

Most MPNs are associated with specific genetic mutations in cancer cells. A pathologist may also use samples of the blood and bone marrow to test for gene mutations. Cytogenetic testing is the study of chromosomes and chromosomal abnormalities. Two tests that may be used to identify genetic abnormalities to indicate if an MPN is present are called fluorescent in situ hybridization (FISH) and quantitative polymerase chain reaction (qPCR). In FISH, pathologists will use fluorescent molecules to highlight chromosomes and spot abnormalities. The qPCR test is a very sensitive test that can identify small, hard-to-find genetic changes.

Diagnostic criteria — the signs, symptoms, and test results that lead doctors to diagnose MPNs — are based on World Health Organization (WHO) revisions to classifications of myeloproliferative neoplasms published in the American Society of Hematology journal, Blood.

In PV, blood work results will show high values for the red cell count, hemoglobin level, and hematocrit levels. In addition, PV leads to an elevated white blood cell count or platelet count. In fact, 50 percent or more of people with PV have a high platelet count. Examining the blood content may show a decreased level of erythropoietin, which is a hormone that stimulates the production of RBCs. Mutations in the JAK2 gene are also present in almost all people with PV.

A raised platelet count is common in ET. One-third of people with ET have slightly elevated RBC or WBC counts. When looking at the bone marrow biopsy, a pathologist will also see too many cells — mainly the large megakaryocyte cells from which platelets derive. In addition, the peripheral blood smear may show enlarged platelets or platelets clumped together.

A doctor must first exclude other conditions as the cause before giving a diagnosis of ET. Doctors may consider reactive thrombocythemia, another cause of excess platelets in the blood. Conditions that can lead to reactive thrombocythemia include active arthritis, gastrointestinal inflammatory disease, iron-deficiency anemia, other types of cancer, or having undergone splenectomy (removal of the spleen).

Prior to diagnosis, hematologists will want to rule out chronic myeloid leukemia, polycythemia vera, primary myelofibrosis, or myelodysplastic syndromes (MDS).

In MF, red blood cells are shaped differently than normal. Rather than having a round, concave shape, RBCs in people with MF are shaped like teardrops. In the early stages of primary myelofibrosis, people may have higher-than-normal counts of white blood cells and platelets. In later stages, however, both WBCs and platelets tend to be lower. Bone marrow biopsy may also show too many or abnormal megakaryocyte cells.

MF may also be diagnosed if an individual has anemia that cannot be attributed to another cause, an enlarged spleen, or a high WBC count, among other signs and symptoms.

Prior to an MF diagnosis, a doctor will make sure the cause is not reactive myelofibrosis caused by an infection, an autoimmune or other chronic inflammatory condition, or another cancer.

People with CML (also known as chronic myelogenous leukemia) will often have a very high white blood cell count and a low red blood cell count. In addition, blasts (immature blood cells) and increased eosinophils and basophils may be present in the blood — an abnormal finding.

In 95 percent of cases of CML, cancer cells have a genetic abnormality called the Philadelphia chromosome (Ph+). Named for the city in which doctors discovered it, this genetic abnormality affects chromosome 22, which swaps sections with part of chromosome 9. This translocated gene is known as BCR-ABL1. Pathologists use FISH and qPCR to help diagnose CML. These tests can identify the BCR-ABL1 gene even when cytogenetic testing does not pick up the Philadelphia chromosome.

In most people with CNL, cancer cells will have a genetic mutation known as colony stimulating factor 3 receptor, or CSF3R. This is a gene that controls the growth and function of certain WBCs. Typically, doctors will diagnose CNL if a person has neutrophilia and a CSF3R mutation.

In CEL, the bone marrow produces an excess of eosinophils, a type of WBC that reacts to allergens and fights some types of parasites. The abnormal presence of myeloblasts in the blood is often present in CEL.

Prior to a CEL diagnosis, a hematologist will want to rule out other causes of excess eosinophils, such as parasitic infections, autoimmune or connective tissues diseases, allergic reactions to medications, or immune deficiencies.

Additionally, CEL will only be diagnosed after other MPNs have been ruled out. No specific genetic mutations have been identified with CEL. While genetic abnormalities are expected in CEL, they must exclude BCR-ABL1, the genetic mutation found in CML. Anyone who has a myeloproliferative neoplasm (MPN) will have to undergo a great deal of blood te...

Anyone who has a myeloproliferative neoplasm (MPN) will have to undergo a great deal of blood te...
read article >