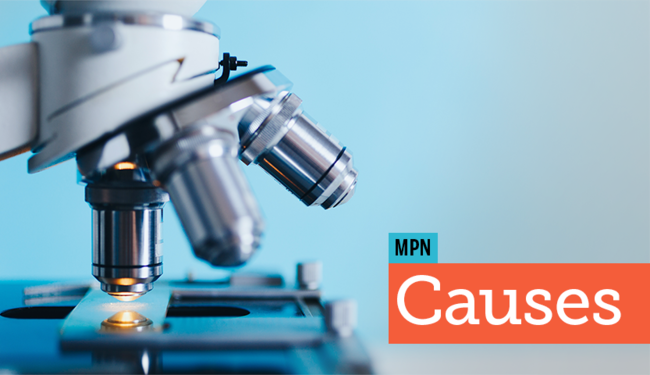 Myeloproliferative neoplasms (MPNs) are blood cancers that involve overproduction of blood cells in the bone marrow. There are three classic types of MPNs. In primary myelofibrosis (MF or PMF), abnormal blood cells grow too quickly, and scar tissue forms in the bone marrow. In essential thrombocythemia (ET), platelets are overproduced. In polycythemia vera (PV), too many red blood cells are produced. Some types of leukemia, including chronic myeloid leukemia (CML), are also considered types of MPN. MPNs are considered rare because fewer than six people in 100,000 are diagnosed each year in the United States.

Like other cancers, myeloproliferative neoplasms (MPNs) are caused by genetic mutations that allow cells to divide and grow in a disorganized way. There are two main types of mutations, inherited and acquired.

Most cancer is caused by acquired mutations. The cause of the mutation is usually unknown. In a few cases, MPNs are related to inherited mutations, but MPNs are generally not considered to be inherited diseases. It is still unclear why some people develop MPNs and others do not.

How Cells Transform Into Cancer

Normal cells divide in a regular, ordered fashion, forming new cells that are exact copies to replace old ones. Certain genes in each cell are responsible for telling cells when to divide and when to stop dividing. Other genes identify and fix problems in DNA that are copied incorrectly, or cause cells with bad DNA to self-destruct rather than keep multiplying. If a genetic mutation causes one or more of these genes to turn off in some cells, the cells can divide at a faster rate without regulation or order, becoming more and more mutated. Mutations may accumulate, further speeding the unchecked growth of abnormal cells. When these disordered cells begin to invade nearby tissues or break off and migrate to other locations, they have become cancerous.

It is important to note that while science is good at finding correlations — or apparent relationships — between factors and disease, correlation does not prove the factor causes the disease. Many risk factors for MPNs have been identified and are being studied for their role in the development of the disease.

Since genetic mutations cause MPNs, risk factors for MPNs include anything that can encourage mutations.

Mutations in DNA are inevitable, and they accumulate with age. Researchers theorize that in rapidly dividing tissues, such as blood stem cells, tens of thousands of mutations likely accumulate by age 60. However, cancer only develops in a small percentage of people.

Risk for chronic myeloid leukemia (CML) goes up with age. Chronic neutrophilic leukemia (CNL) does not have any known risk factors. The median age for CNL diagnosis is 66 years, but people from ages 15 to 86 have been diagnosed with CNL.

While MPNs are not considered to be inherited diseases, it is possible for more than one person in a family to have an MPN. In rare cases, MF and PV have been found to run in families.

According to the Leukemia and Lymphoma Society, PV is more prevalent among Jews of Eastern European descent than in people with other backgrounds.

Gender is a minor risk factor in some MPNs. Women are 1.5 times more likely to develop ET than men. CML is slightly more common in men than in women.

People who work with carcinogenic chemicals, such as benzene and toluene, may be more likely to develop primary myelofibrosis.

Studies indicate that smoking a pack of cigarettes per day for 20 or more years may be a risk factor for polycythemia vera in women specifically.

Women with a body mass index greater than 30 have an increased risk for developing essential thrombocythemia.

Scientists have identified several acquired genetic mutations in blood stem cells that often play a role in the development of MPNs. The genetic mutations usually present in the three most common MPNs include the JAK2, CALR, and MPL gene markers. Mutations that disrupt the function of these genes can contribute to the uncontrolled growth of blood stem cells. Knowing which mutations are present in cancer cells helps doctors recommend effective treatment options.

According to the National Cancer Institute’s Dictionary of Cancer Terms:

In roughly 95 percent of PV cases, cancer cells have a JAK2 gene mutation. Specifically, the JAK2V617F gene is present in blood-forming cells.

In cases of ET, there may be mutations of JAK2, CALR, or MPL genes. Roughly 60 percent of ET cases involve a JAK2 gene mutation and roughly 33 percent involve a MPL mutation.

Between 50 percent and 60 percent of MF cases test positive for a JAK2 gene mutation. Estimates of cases of MF with the acquired genetic mutation CALR range from 3 percent to 24 percent. In addition, estimates range from 5 percent to 33 percent for the mutation of the MPL gene.

Mutations in the CSF3R gene are common in people with CNL.

CEL has not been associated with a specific chromosome or genetic abnormality, but on rare occasions may be linked to an acquired mutation.

In more than 90 percent of adults and more than 40 percent of children with mastocytosis, cancer cells have an acquired genetic mutation in a protein called c-kit.