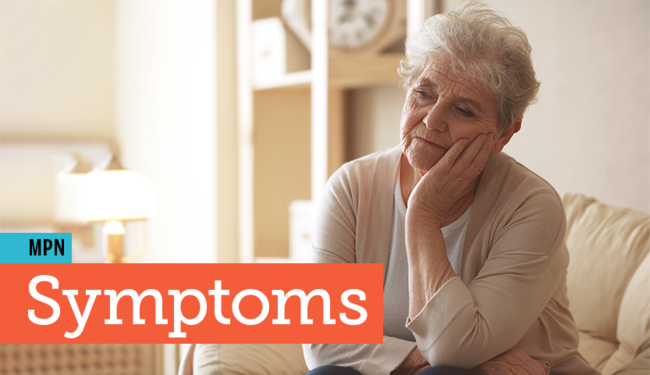 Myeloproliferative neoplasms (MPNs) are a group of cancerous disorders in which blood stem cells develop abnormally and excessively in the bone marrow. Before 2008, MPNs were known as myeloproliferative disorders (MPDs). MPNs are closely related to other types of blood cancer such as leukemia, lymphoma, and myeloma. Many people experience no symptoms of MPN when they are first diagnosed. MPN symptoms may change or worsen over time as MPN progresses.

Some common symptoms of MPNs are also typical side effects of MPN treatments. Your doctor can help you understand where symptoms are coming from and how best to manage them.

Since MPNs involve one or more different types of blood cells, they may cause different symptoms. Some symptoms are common in many or all types of MPNs, while others are associated only with certain types.

Here is a quick guide to the basic function of each type of blood cell in the healthy body:

The MPN Research Foundation recommends getting regular exercise and taking naps as effective ways to increase energy levels. In some cases, when fatigue or loss of concentration is severe, doctors may prescribe a stimulant such as Ritalin (methylphenidate).

In people with MPNs that raise or lower platelet counts to dangerous levels, abnormal bleeding or clotting may result. If there is a low platelet count, bleeding symptoms such as bruising easily, bleeding more than usual when injured, nosebleeds, heavy periods in women, or blood in the urine or stool may result. Bleeding symptoms may occur in MF, PV, and essential thrombocythemia (ET).

Excess RBCs, abnormal platelets, or abnormal WBCs are risk factors for blood clots in people with MPNs. Due to the tendency to form clots, MPNs raise the risk for life-threatening complications such as deep vein thrombosis, pulmonary embolism, heart attack, and stroke.

Doctors may prescribe aspirin for people with MPNs to reduce the risk of clotting. Sometimes anticoagulants (blood thinners) may be prescribed if a clot occurs in a large vein. Phlebotomy (drawing blood) is an effective treatment to prevent blood clotting in polycythemia vera.

The spleen, an organ located on the left side of the abdomen, normally functions as a reservoir of red blood cells. In many cases of myelofibrosis (MF) and some cases of polycythemia vera (PV), the spleen becomes engorged with excess abnormal RBCs or takes over production of RBCs from damaged bone marrow. In either situation, the result is an enlarged spleen — also called splenomegaly — which can cause feelings of abdominal fullness, pain, or pressure, especially on the left side. The swollen spleen may crowd the stomach, resulting in loss of appetite or feeling full after eating only a little, known as satiety. Decreased appetite may lead to weight loss. In some people with MPNs, the liver also becomes enlarged (hepatomegaly).

Many treatment options for MPNs can also help reduce an enlarged spleen. In severe cases of splenomegaly, splenectomy (surgical removal of the spleen) or radiation may be considered.

Fevers and frequent infections may be a symptom of neutropenia — low levels of white blood cells seen in MF and other types of MPNs — or a side effect of cancer treatment.

Itching (also referred to as pruritus) is a common symptom in many types of MPN. In MPNs, itching is a result of substances known as cytokines and histamine, both of which are released by immune system cells and associated with inflammation.

Tips that may help reduce itching include:

Night sweats are common symptoms in most MPNs.

MPNs may cause skin to be discolored and appear reddish or purple. Fingers or toes may feel cold and turn blue. Ulcers on the ankles or legs or in the mouth may be a side effect of Hydroxyurea, a treatment for MPN.

Polycythemia vera (PV) and essential thrombocythemia (ET) are both associated with vision disturbances, such as blurred vision or blind spots. ET may also cause hearing problems, such as tinnitus (ringing in the ears). These symptoms are believed to be associated with hyperviscosity — thicker, stickier blood — that also contributes to clotting problems.

ET can cause silent migraines — migraines that cause visual and sensory disturbances like those in migraine auras, but without the headache.

MPNs may cause different types of pain. Abdominal pain may be due to an enlarged spleen. Bone pain may be caused by overproduction of blood cells and crowding in the bone marrow, and may occur in MF as the condition progresses and becomes more severe. Headaches may be caused by hyperviscosity or as a side effect of MPN treatments. MF may cause joint pain or gout. ET can cause pain in the hands and feet, as well as coldness or blue skin on the fingers or toes.

People with MPNs have a higher rate of depression and anxiety than that of the general population. According to the National Institute of Mental Health, the risk for depression is higher in people with many types of chronic illness and may be triggered by feelings of anxiety, stress, and worry that arise as a result of living with a chronic condition. Treatment for depression — which may include antidepressant medication or cognitive behavioral therapy (CBT) — can improve the quality of life in those living with chronic conditions and depression. Having an active support system, whether family members, friends, spiritual community, or online or in-person support groups, can make it easier to cope with these challenges.

MPN Symptom or Treatment Side Effect?

Symptoms of MPNs and side effects from treatments are likely to be different for each person, depending on many factors. Be sure to report any new or worsening symptoms or side effects to your doctor. Many symptoms and side effects can be managed with medications or lifestyle changes.

Kelly Crumrin is a senior editor at MyHealthTeams and leads the creation of content that educates and empowers people with chronic illnesses. Learn more about her here.

Myeloproliferative neoplasms (MPNs) are a group of blood cancers that typically occur in people...

Myeloproliferative neoplasms (MPNs) are a group of blood cancers that typically occur in people...
read article >

There are about 295,000 people in the United States with myeloproliferative neoplasms (MPNs),...

There are about 295,000 people in the United States with myeloproliferative neoplasms (MPNs),...
read article >

Stem cell transplants are sometimes used as a treatment for people with myelofibrosis, a type of...

Stem cell transplants are sometimes used as a treatment for people with myelofibrosis, a type of...
read article >

Some treatments for myeloproliferative neoplasms (MPNs) have been around for decades, while...

Some treatments for myeloproliferative neoplasms (MPNs) have been around for decades, while...
read article >

How To Get MPN Treatment Without Insurance

How To Get MPN Treatment Without Insurance

close
OVERVIEW TYPES DIAGNOSIS CAUSES SYMPTOMS TREATMENTS RELATED CONDITIONS
New to myMPNteam? Learn More
Quick Links
Q+A Treatments A-Z Resources Are you a provider? Crisis
About Us
What is myMPNteam? Partner with us Terms of service Press/News Privacy policy Cookie policy
Help With This Site
Getting started FAQ Community guidelines Contact us Accessibility
© 2022 MyHealthTeams. All rights reserved.
myMPNteam is not a medical referral site and does not recommend or endorse any particular Provider or medical treatment.
No information on myMPNteam should be construed as medical and/or health advice.